Posted on March 22, 2016 by SkyVision Solutions 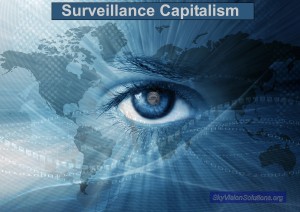 An essay preview was given this month for a new book to be authored by Shoshana Zuboff (now actually published in 2019) dealing with the topic of “surveillance capitalism” [1] [2].  Giant corporations supported by government have created a new digital “subspecies of capitalism based in which profits derive from the unilateral surveillance and modification of human behavior.”

“While the world is riveted by the showdown between Apple and the FBI, the real truth is that the surveillance capabilities being developed by surveillance capitalists are the envy of every state security agency.” [1]

Whether it be through “automotive telematics” where your every movement by automobile can be tracked and analyzed or through utility “smart” meters where your activities inside the home can be similarly monitored and analyzed, these peepholes of surveillance into peoples’ lives are multiplying like cockroaches.

Regarding smart meters and quoting from a paper published in 2014 [3]:

“By analyzing smart meter’s data, it is possible to perform ‘consumer profiling’ with an alarmingly high accuracy.  Examples range from how many people live in the house, duration of occupancy, type of appliances, security and alarming systems, to inferring special conditions such as medical emergencies or new born baby.”

“Profiling allows extracting residents’ behavior even without utilization of sophisticated algorithms and computer aided tools.  Murrill and colleagues have shown that it is possible to identify the use of major appliances in a house, by analyzing only a 15 min interval cumulative energy consumption data.  Molina-Markham et al. have shown that with the current general statistical schemes it is possible to identify the usage pattern from AMI data even without the detailed signatures of appliances or previous training.”

“This data is valuable to third parties, from insurance companies to entertainment agencies and government authorities.  Once you have access to the network data in AMI or SG, you will also have access to the customer’s name and address information collected and stored for billing purpose.  Although obtaining detailed information is one of the objectives of SG, the process can backfire when such detailed information is collected and used without the customers’ consent.”

“As the number of smart meters increase exponentially, security issues associated with SG and AMI grow substantially from within the system as well as outside.  Detailed information of customers’ consumption is critical as it can reveal their life style.”

“The price signal and commands received at consumer end are also potential areas for cyber and physical attack for the purpose of espionage, damaging infrastructure or power theft.” [3]

Recently, I posted an article at this website that ‘Smart’ Meters Generate a ‘Gold Mine of Data’ for Utilities [4].   In 2014, a Goldman Sachs report referred to a “gold rush,” a race to “vast amounts of data” [5]:

“In connected cities, the U.S. has emerged as a leading adopter of smart meter technology for power utilities, approaching 50% penetration of 150 million total endpoints.  The initial foray into connected cities was catalyzed by over $3 billion in stimulus funding and support for smart grid technology as part of the 2009 American Recovery and Restoration Act.”

“As with any gold rush, the early winners from the IoT are likely to be the suppliers selling the ‘shovels’ to make the connections possible and to process the vast amounts of data.  But in the long run, the ultimate impact of this third wave of the Internet depends on the adopters in these proving grounds finding gold in connecting billions of devices into an intelligent network.” [5]

An Unprecedented Assault on Self-Determination

The implications of surveillance capitalism go well beyond the initial serious concerns over invasions of privacy.  As stated by Zuboff [1]:

“The assault on behavioral data is so sweeping that it can no longer be circumscribed by the concept of privacy and its contests.  This is a different kind of challenge now, one that threatens the existential and political canon of the modern liberal order defined by principles of self-determination that have been centuries, even millennia, in the making.  I am thinking of matters that include, but are not limited to, the sanctity of the individual and the ideals of social equality; the development of identity, autonomy, and moral reasoning; the integrity of contract, the freedom that accrues to the making and fulfilling of promises; norms and rules of collective agreement; the functions of market democracy; the political integrity of societies; and the future of democratic sovereignty.”

“We are the native peoples now whose tacit claims to self-determination have vanished from the maps of our own behavior.  They are erased in an astonishing and audacious act of dispossession by surveillance that claims its right to ignore every boundary in its thirst for knowledge of and influence over the most detailed nuances of our behavior.”

“The goal: to change people’s actual behavior at scale … we can capture their behaviors, identify good and bad behaviors, and develop ways to reward the good and punish the bad.” [1]

The writings of Zuboff are consistent with a recent paper from Portland State University and highlighted at this website that ‘Smart’ Meters Represent Industrial Profiteering and Government Sanctioned Surveillance [6]:

“Technology developments have broad applications and implications, but the smart energy grid that is being implemented across the United States and Canada, like the worldwide web, we argue, is being appropriated as part of a design to draw upon higher level data from dwellers (as surplus value) in the service of industrial profiteering and in the surveillance interests of industry and the state.”

“With the smart grid, electrical and human energy are merged and converted into commodified units of data with which utilities — and potentially the state — actualize a deeper opening and intrusion of households toward the instrumental interests of economic, social, cultural, and increasingly political control.  These acts of intervention are undertaken in the name of efficiency, environmental sustainability, and household cost savings.”

“The promise of smart meters relies, in one part, on behavioural changes of users, such that demand management objectives are met to offset peak loads and eliminate the necessity of adding more electricity production through expensive power production facilities.”

“Thus surveillance of energy consumption habits, we argue, acts as a mode of disciplinary power that punishes, financially and socially.”

“In the long term, smart metering, and the innovations that are likely to be built upon it, with ever-greater capacities to examine behavioural microdata, represents an assault upon individual, and in its collectivity, social, cultural, and political identity.” [6]

It is clear that surveillance capitalism as described by Zuboff is an existential threat to the individual rights that people have gained over the centuries at considerable sacrifice.  It threatens society as we know it in terms of social relations, politics and governance.  Zuboff fears that citizens are currently losing their rights and freedoms due to “ignorance, learned helplessness, inattention, inconvenience, habituation, or drift.”

Zuboff states that the first and necessary response to an increased awareness of something that degrades and demeans human dignity is indignation.  As Zuboff concluded in her essay [1]:

“The bare facts of surveillance capitalism necessarily arouse my indignation because they demean human dignity.  The future of this narrative will depend upon the indignant scholars and journalists drawn to this frontier project, indignant elected officials and policy makers who understand that their authority originates in the foundational values of democratic communities, and indignant citizens who act in the knowledge that effectiveness without autonomy is not effective, dependency-induced compliance is no social contract, and freedom from uncertainty is no freedom.” [1]

In the fight against surveillance capitalism as implemented through utility smart meters and other invasive technologies, I hope that I have helped to raise your level of awareness to these threats and that I have helped raise your level of indignation.  Please do not sit by with inattention or helplessness; take a stand and rebel against those perpetrating the assault upon our dignity and our rights.

Corporations have created a new kind of marketplace out of our private human experiences. That is the conclusion of an explosive new book that argues big tech platforms like Facebook and Google are elephant poachers, and our personal data is ivory tusks.  Author Shoshana Zuboff writes in “The Age of Surveillance Capitalism: The Fight for a Human Future at the New Frontier of Power”: “At its core, surveillance capitalism is parasitic and self-referential. It revives Karl Marx’s old image of capitalism as a vampire that feeds on labor, but with an unexpected turn. Instead of labor, surveillance capitalism feeds on every aspect of every human’s experience.” [7]

.
Source Material for this Article

[1] “The Secrets of Surveillance Capitalism,” Frankfurter Allgemeine, March 5, 2016, at http://www.faz.net/aktuell/feuilleton/debatten/the-digital-debate/shoshana-zuboff-secrets-of-surveillance-capitalism-14103616.html

[5] “The Sectors Where the Internet of Things Really Matters,” Harvard Business Review, October 2014, at https://hbr.org/2014/10/the-sectors-where-the-internet-of-things-really-matters/

[7] Age of Surveillance Capitalism: “We Thought We Were Searching Google, But Google Was Searching Us” at https://www.youtube.com/watch?v=Vo6K-bPh39M

Copyright Notice © SkyVision Solutions and Smart Grid Awareness, 2013 – 2019.  Unauthorized use and/or duplication of original material from this site without express and written permission from this site’s author and/or owner is strictly prohibited.  Excerpts and links may be used, provided that full and clear credit is given to SkyVision Solutions and Smart Grid Awareness with appropriate and specific direction to the original content.

3 Responses to Smart Meters: An Example of Surveillance Capitalism

Leave a Reply to Linda from Naperville Cancel reply