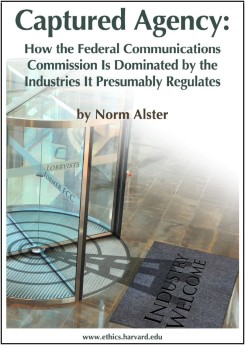 In a new publication just released from Harvard University, Norm Alster examines how the Federal Communications Commission (FCC) is dominated by the industries it presumably regulates.  What follows are selected quotations which are organized in a way to effectively create a synopsis version of the original 59-page document. [1]

“Consumer safety, health, and privacy, along with consumer wallets, have all been overlooked, sacrificed, or raided due to unchecked industry influence.” [2]

“The Federal Communications Commission sits at the heart of a bipartisan Washington web of institutional corruption that has for many years championed corporate interests, typically at public expense.  Echoing industry, the FCC has ignored the growing evidence that wireless technologies pose serious health risks.” [3]

“A troubling body of evidence suggests exposure to even low emission levels at typical cellular frequencies between 300 MHz and 3 GHz can have a wide range of negative effects.”

“Just months ago, a German scientist who had been outspoken in denouncing the view that cell phones pose health risks reversed course.  In an April 2015 publication, Alexander Lerchl reported results confirming previous research on the tumor-promoting effects of electromagnetic fields well below human exposure limits for mobile phones.  ‘Our findings may help to understand the repeatedly reported increased incidences of brain tumors in heavy users of mobile phones,’ the Lerchl team concluded.  And in May 2015, more than 200 scientists boasting over 2,000 publications on wireless effects called on global institutions to address the health risks posed by this technology.” [4]

“Industry controls the FCC through a soup-to-nuts stranglehold that extends from its well-placed campaign spending in Congress through its control of the FCC‘s Congressional oversight committees to its persistent agency lobbying.  ‘If you‘re on a committee that regulates industry you‘ll be a major target for industry,’ said Twaun Samuel, chief of staff for Congresswoman Maxine Waters.  Samuel several years ago helped write a bill aimed at slowing the revolving door.  But with Congress getting its marching orders from industry, the bill never gained any traction.

“Industry control, in the case of wireless health issues, extends beyond Congress and regulators to basic scientific research.  And in an obvious echo of the hardball tactics of the tobacco industry, the wireless industry has backed up its economic and political power by stonewalling on public relations and bullying potential threats into submission with its huge standing army of lawyers.”

“As a captured agency, the FCC is a prime example of institutional corruption.  Officials in such institutions do not need to receive envelopes bulging with cash. But even their most well-intentioned efforts are often overwhelmed by a system that favors powerful private influences, typically at the expense of public interest.”

Note:  “Captured agencies are essentially controlled by the industries they are supposed to regulate.”

“Perhaps the best example of how the FCC is tangled in a chain of corruption is the cell tower and antenna infrastructure that lies at the heart of the phenomenally successful wireless industry.  It all begins with passage of the Telecommunications Act of 1996, legislation once described by South Dakota Republican senator Larry Pressler as “the most lobbied bill in history.’ …   Specifically, [local governments] cannot cite health concerns about the effects of tower radiation to deny tower licenses so long as the towers comply with FCC regulations.” 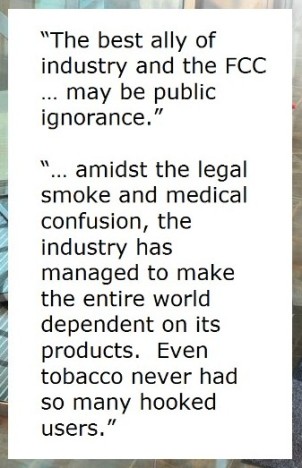 “The FCC‘s network of corruption doesn‘t just shield industry from needed scrutiny and regulation on matters of public health and safety.  Sometimes it just puts its hand directly into the public pocket and redistributes that cash to industry supplicants.”

“The General Accounting Office (GAO) has issued several reports citing fraud, waste and mismanagement, along with inadequate FCC oversight of the subsidy program.  Bribery, kickbacks and false documentation can perhaps be expected in a handout program mandated by Congress and only indirectly supervised by the FCC.  But the scope of fraud has been impressive.  The most striking corruption has marred the E-Rate program, which subsidizes Internet hardware, software and service for schools and libraries, and the Lifeline cell phone subsidies.”

“Temptation is everywhere in Washington, where moneyed lobbyists and industry representatives throw the best parties and dinners.  Money also allows industry to control other important factors, like the research agenda.  All of this works together to industry‘s advantage because — as with other instances of institutional corruption — there are compromising dependencies.  Policy makers, political candidates and legislators, as well as scientific researchers are all compromised by their dependence on industry money.”

“The FCC … has never been a consumer advocate. …  That‘s what makes the FCC‘s potential move into privacy protection so important and so surprising.”

“When the smoke clears — and it hasn‘t yet — the FCC could make consumer identifiers like IP addresses the equivalent of phone numbers.  Suddenly, the Internet companies that have trafficked in all that personal data would be subject to the same controls as the phone and cable companies.”

“It remains to be seen if [officials] at the FCC are really willing to take on privacy enforcement.  Such a stance would require great courage as the entire Internet infrastructure is built around privacy abuse.  It is also questionable whether the FCC would have the courage to challenge Google — a rare corporate ally in the battles over Net Neutrality.”

“The inclination of consumers to change behavior should negative health effects be confirmed suggests the stakes are enormous for all companies that derive revenue from wireless usage.”

“It‘s clear at this point [that] confirmation of health dangers — or even of behind-the-scenes political pressures — from wireless will substantially diminish public trust in the FCC.  [See figure below.]  Skeptics might argue that this gives the FCC motive to continue to downplay and dismiss further evidence of biological and human health effects.  Those of a more optimistic bent might see in these findings reason to encourage an FCC concerned about public trust to shake itself loose from special interests.” 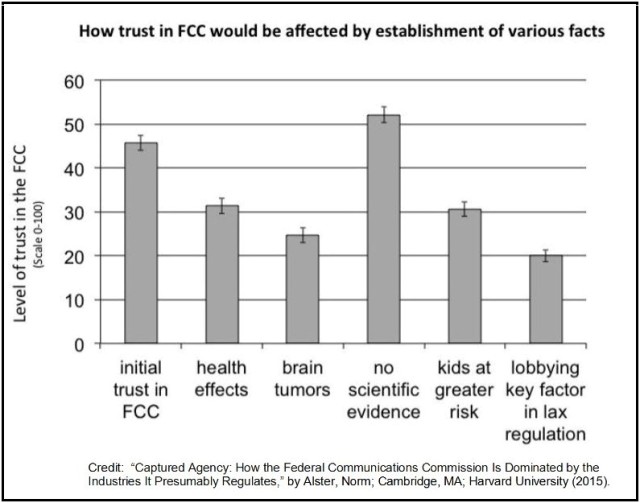 A Modest Agenda to ‘Right Some of the Wrongs’ [9]

“There are some steps — and most are modest — that the FCC can take now to right some of the wrongs that result from long years of inordinate industry access and influence:

“Let‘s be clear. …  The problem is not technology, which unarguably brings countless benefits to modern life.   The problem is with the over-extension of claims for technology‘s usefulness and the worshipful adulation of technology even where it has fearful consequences.  Most fundamentally, the problem is the willingness in Washington — for reasons of both venality and naïveté — to give technology a free pass.”

“Personally, I don‘t believe that just because something can be done it should heedlessly be allowed.  Murder, rape and Ponzi schemes are all doable — but subject to prohibition and regulation.  Government regulators have the responsibility to examine the consequences of new technologies and act to at least contain some of the worst.”

“Beyond legislators and regulators, public outrage and the courts can also play a role — but these can be muffled indefinitely by misinformation and bullying.”

Material from the original publication has been adapted/ remixed for purposes of this blog article by SkyVision Solutions.  Such adaptation is allowed under the terms of a Creative Commons 4.0 license, but the publication author does not necessarily endorse this adaptation.

[2]  “Captured Agency: How the Federal Communications Commission Is Dominated by the Industries It Presumably Regulates,” page 5 of PDF document at:
http://bit.ly/FCCcaptured.

[3]  Description for “Captured Agency: How the Federal Communications Commission Is Dominated by the Industries It Presumably Regulates Kindle Edition,” at http://www.amazon.com/Captured-Agency-Communications-Commission-Industries-ebook/dp/B010CB0TWA/ref=sr_1_1?ie=UTF8&qid=1435350065&sr=8-1&keywords=norm+alster

[4]  “Captured Agency: How the Federal Communications Commission Is Dominated by the Industries It Presumably Regulates,” pages 11, 18 of PDF document at:
http://bit.ly/FCCcaptured.

[6]  Ibid. Keyword search results of sentences or paragraphs for the word “corruption” contained within the PDF document at: http://bit.ly/FCCcaptured.