Dr. De-Kun Li is a leading research scientist in reproductive and prenatal epidemiology.  Biographical information for Dr. Li is listed at the end of this page.

In December 2012, Dr. De-Kun Li filed testimony before the Maine Public Utility Commission regarding the issues of wireless smart meter safety.  Specifically, as you can read below, Dr. Li was asked about possible non-thermal radiation effects from RF emissions and whether science supports the conclusion that wireless smart meters are “safe.”  As you can read, the response was “No.”  The testimony also points out how exposure to cell phone radiation is considered short-term and voluntary, while smart meter emissions are chronic and involuntary.  Dr. Li’s testimony is that involuntary exposure requires “more stringent safety standards.” 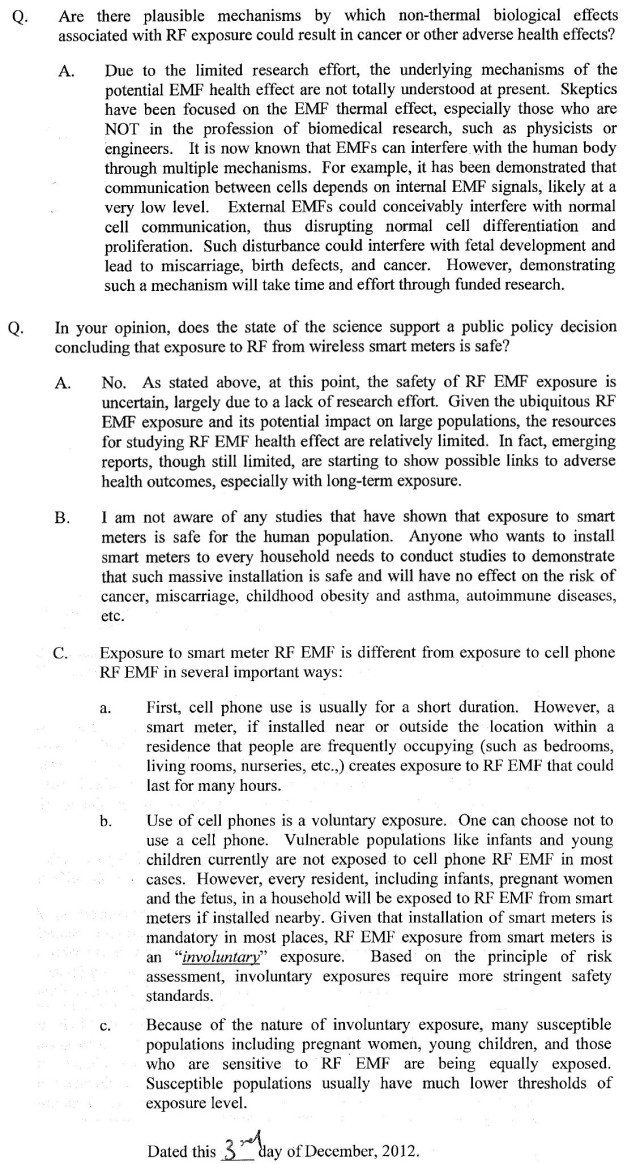 For Dr. Li’s full testimony, refer to the following link:

Additionally, in 2011, Dr. Li previously commented on a draft smart meter-related report issued from the California Council on Science and Technology (CCST).  In his comment letter, he made many relevant points, among them that “Unknown does not mean safe.“  To review that document, refer to the link below:

De-Kun Li, MD, PhD, MPH, is a senior research scientist at the Division of Research, Kaiser Permanente Northern California.  Dr. Li completed his medical training and master’s degree in public health at Shanghai Medical University, Shanghai, China.  He then received his PhD in epidemiology from the University of Washington, Seattle.  Dr. Li has conducted research in the areas of pregnancy outcomes, sudden infant death syndrome, women’s health, breast cancer, pharmacological effects on pregnancy outcomes, genetic etiology, and occupational exposures since 1984.  His research interests include: reproductive, perinatal, and pediatric epidemiology, such as etiology of miscarriage, sudden infant death syndrome, preterm delivery, preelcampsia, low birth, infertility, cerebral palsy, birth defects, pediatric diseases (including childhood cancer and neurological disorders), autoimmune diseases in relation to maternal-fetal interaction, breast cancer, and risk factors for low semen quality.  Dr. Li’ research areas also include pharmacoepidemiolgical effect of medication use during pregnancy, genetic determinants of adverse pregnancy outcomes, the effect of electromagnetic fields on adverse pregnancy outcomes and low sperm quality, and the effect of endocrine disruptors, specifically Bisphenol A (BPA), on male and female reproductive systems.  He is currently the associate editor of the American Journal of Epidemiology.  Dr. Li has participated in a National Institute of Child Health and Human Development (NICHD) sponsored panel evaluation of “Back to Sleep” campaign and Sudden Infant Death Syndrome risk.  He has also served as a member on the Ad Hoc Committee reviewing the NICHD program project, and on several Special Emphasis Panels at National Institute of Occupational Safety and Health and National Institute of Environmental Health and Sciences reviewing grant proposals.  He has served as a member of the Policy Committee at the American College of Epidemiology.  He was invited by the National Academy of Science to participate as a panel member in the U.S.-China Roundtable on Collaboration of Biomedical Research.  In addition, he teaches at Stanford University and supervises doctoral students from the departments of epidemiology at UCB (University of California, Berkeley) and UCLA (University of California, Los Angeles).

Dr. Li has published extensively with 29 first-authored publications.  He has obtained, as the principal investigator, numerous grants, ranging from $600,000 to $ 3.49 million from various federal agencies of the National Institutes of Health, as well as the California Public Health Foundation.  Many of his publications have been widely reported by the national, international, and local news media including recent studies of caffeine intake and miscarriage, pacifier use and use of a fan in relation to SIDS risk, and depression during pregnancy and preterm delivery.  Other examples of work receiving wide media coverage include the risk of miscarriage associated with EMF exposure, NSAID use and the risk of miscarriage, hot tub use during pregnancy and the risk of miscarriage, and maternal-fetal HLA compatibility and the risk of preterm delivery.