Posted on November 3, 2015 by SkyVision Solutions

‘Smart’ Meters are expected to occasionally fail catastrophically while analog meters do not normally have that failure mode.  This was the information presented by an industry representative at a recent conference sponsored by the Edison Electric Institute (EEI).

Similar revelations have led this website to write articles such as:

Tom Lawton, a representative of TESCO – The Eastern Specialty Company, gave a presentation that included the slide shown below.   TESCO is an electric meter testing equipment and services company. 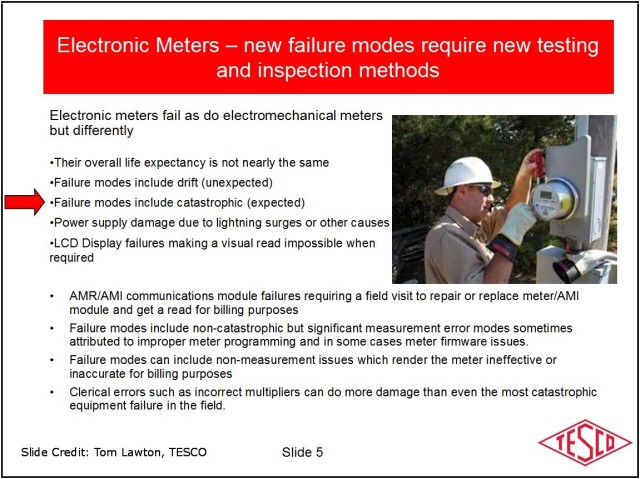 Analog meters are subject to fairly simple mechanical problems such as friction wear and magnet failure.  As the above slide indicates, however, electronic meters are subject to “new failure modes,” and expected failure modes now include those that are termed “catastrophic.”  Furthermore, the slide indicates that these types of failures are “different” than those for electromechanical meters.

The term “catastrophic failure” can be analyzed on two separate levels.  From a somewhat generic perspective involving any computerized electronic device it can be defined as:

A catastrophic failure is complete, sudden breakdown in an electronic system, computer or network.  Such a breakdown may occur as a result of a hardware event such as memory chip failure or surge on the power line.  Catastrophic failure can also be caused by software conflicts or malware.

“a meter which has burnt, melted, blackened, caught fire, arced, sparked, or exploded.”

.
What is remarkable is that smart grid industry officials continually deny that ‘smart’ meters can cause fires.  This just isn’t true.  ‘Smart’ meters can and have caused fires, and the risk is certainly much higher than for a traditional analog meter which simply doesn’t have failure modes that would lead to such an event.

As you can see from the TESCO slide, electronic meters are also subject to power supply damage due to lightning surges or other causes and that the “overall life expectancy is not nearly the same” as a traditional meter.  This supports the information published just a few days ago at this website, Congressional Testimony: ‘Smart’ meters have a life of 5 to 7 years.

In a related issue, a presentation from the Utility Analytics Week 2015 in New Orleans revealed another important aspect relevant to the risks for ‘smart’ meter-related fires:

In addition to catastrophic meter failures, the TESCO presentation explained that significant metering errors can occur due to improper programming and firmware issues.  These errors can cause inaccurate billing.  This is something else the utilities never want to admit.

As pertaining to accuracy concerns, the smart grid industry relies on misleading statements such as:

“Smart meters are rigorously tested for accuracy even before they leave the manufacturing plant. …  All meter manufacturers must follow performance standards” set by the American National Standards Institute.”

However, as slide 7 of the TESCO presentation shows:

“A meter test that indicates a meter is within the required accuracy parameters does not mean your service is being measured and billed accurately.”

So whether it be for issues related to ‘smart meter’ fires or accuracy in billing, there are legitimate concerns to be addressed.  Collectively, along with health concerns, privacy invasions, cyber threats, and financial costs, ‘smart’ meters are certainly risky and dumb investments.

Recently, a document was discovered from 2006 confirming that utility experts have known for years that solid-state meters occasionally suffer from “catastrophic failures”:

“[T]hree utilities were quite frank that solid-state meters do fail occasionally while electromechanical meters rarely fail completely. … ‘We lost several nights sleep worrying about catastrophic failures, but it was worth the risk’ according to Pini.”

Based upon the context of the above statements in the document, catastrophic meter failures were “worth the risk” due to the solid-state meters being judged more accurate and being able to save on calibration costs for the utility company.

“How hot are your meters?”, at http://www.intelligentutility.com/article/15/10/how-hot-are-your-meters