From India: Smart Meter Cyber Attacks ‘Could Bring the Country Down to its Knees’

Posted on November 21, 2015 by SkyVision Solutions 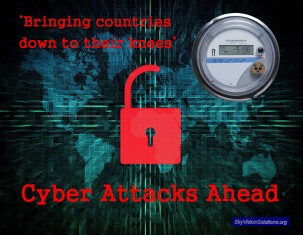 he installation of ‘smart’ meters under India’s National Smart Grid Mission could pose a serious threat to the country’s critical infrastructure, one of India’s leading experts in cyber security has said.

According to Sachin Burman, Director, National Critical Information Infrastructure Protection Centre (NCIIPC), as reported by The Hindu, smart meters to be installed under the country’s program “are not data secure and are open to cyber attacks that could weaken the stability of the country’s power sector.”

Mr. Burman recently participated in a workshop on India’s information infrastructure program and stated that while smart meters were designed to fend off attempts at tampering by consumers, they are vulnerable to cyber attacks.   Making the smart meters data secure would push up the cost by several times.   Again as reported by The Hindu, “a successful attack on power infrastructure could bring the country down to its knees,” warned Burnman.

The statements from India are not surprising to readers of this website where we have been quoting experts from the United States and elsewhere that continued deployment of utility ‘smart’ meters can have dire consequences.  To review, here are just a few of the more recent articles related to the cyber threats posed by ‘smart’ meters:

What is surprising and reckless, however, is that utilities continue smart meter deployments despite all the warnings.  Even though some of the warnings are provided through Congressional hearings, it would appear that the only real result is talk of the need for “enhanced security.”  Of course, Talk is cheap., meaning that, “it is easier to say you will do something than to actually do it.”

Moreover, there is no utility official or cybersecurity expert who can claim to have addressed the basic fundamental fact that ‘smart’ technology dramatically increases the cyber threats posed to the electric grid.  What many people fail to realize is that it is one thing to have a cyber intrusion for a financial institution as compared to the nation’s critical infrastructure.  The risks are not comparable in terms of possible outcomes.

As a simple example of how reckless the utility industry is with regard to cybersecurity and how dismissive it is with regard to the risks, listen to the following quotation from the Smart Grid Consumer Collaborative (SGCC) propaganda organization:

“They encrypt the transmitted data using cybersecurity methods; much like the ones banks use for online transactions and ATMs.”

As stated by another article at this website in December 2014, Cyber Hackers Can Now “Harm Human Life” Through Smart Meters.  Will anyone finally take action to avoid “bringing the country down to its knees” before it is too late?