Posted on June 5, 2015 by SkyVision Solutions

Earlier this week, we reported on a ‘Ball of Fire’ from a Smart Meter Explosion at a home in Ontario, Canada.

Veronica Onyskiw was interviewed on Talk Radio AM 640 in Toronto yesterday regarding the smart meter explosion that resulted in what she refers to as a “huge ball of fire” emanating from the side of her home.

The first eight minutes of the audio/video provided below is for the interview of Veronica Onyskiw.  The remainder of the clip deals with other callers to the radio program on the subject of exploding smart meters.

[The above audio/video may contain material used pursuant to the Fair Use Doctrine under 17 U.S.C. 107.  It is presented in the public’s interest for non-commercial purposes.]

“I looked out the back window in time to see the reflection of this huge ball of fire; it lit up the back garage, the entire back yard, and I could see red sparks reflected in the glass windows of the garage. …  I was terrified.”

“What is this?  What happened [Veronica said to the fire department responders]?  They said it’s your hydro meter.  He said you have a smart meter.”

“This is a very real and a very serious problem. … I think it requires a full government investigation.  We all have these things attached to our homes.”

“If our house had been a wooden structure and not a brick structure, the fire captain told us our house would be gone and we wouldn’t be alive.  Now that’s a pretty serious fire risk in my opinion.”

“None of us were asked our permission to have these things put in.”

Progressive Conservative MPP John Yakabuski questioned the safety of the devices after one charred the outside of a brick home this past Sunday.

“If a smart meter in Collingwood could catch fire and explode despite your assurances, how do we know there are not tens of thousands more just like it in the province of Ontario, waiting to go off?” Yakabuski said during Question Period.

Yakabuski said smart meters, which were installed on homes across the province at the order of the Ontario government, have failed to produce the promised savings through time-of-use electricity pricing.

“Now we learn that these devices may burn without warning and burn a ratepayer’s house down,” he said, demanding to know the government’s plan of action in response to the incident.

In response to a question from the Enterprise-Bulletin following her keynote remarks at the 2015 Ontario Liberal Annual General Meeting held Saturday at Blue Mountain Resort: 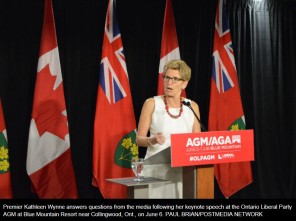 Ontario Premier Kathleen Wynne says that if there turn out to be any “systemic” concerns with smart meters following the Collingwood smart meter fire the government will address them.

“I don’t know the technical problems there but they will do a review and we will get that information back and you know if there’s anything systemic about what happened there then we will look at it, but I just don’t have enough information to comment on it at this point,” she added.

This past week there has been some good questioning by the media and politicians on the safety of smart meters as a result of the well-reported smart meter explosion.  It remains to be seen whether this triggers an objective review the smart meter program in Ontario or if the issue just gets “swept under the rug.”