Posted on May 6, 2015 by SkyVision Solutions

Underwriters Laboratories (UL) last week gave a passing grade for a sample of 72 smart meters that were previously provided by the utility company NV Energy for product testing.

Yesterday, the Associated Press ran with a story reporting “NV Energy is using safe smart meters,” based upon the UL testing results.  This leap from compliant test sample results to “safe smart meters” is nonsensical.

As I stated last year in a comprehensive article:  Smart Meters Increase the Risk of Fires!

Nothing has changed.  For a number of reasons, smart meters inherently increase the risk of fires to homes as compared to analog meters.

Any mechanical or electronic device has a characteristic failure rate.  Elster, a major smart meter manufacturer, estimates that:

“Most smart meters have a failure rate of approximately 0.5%.”  Elster further states that:  “Meter failure rates tend to follow a ‘bathtub’ curve — that is, they’re highest immediately following deployment and as the end of their normal life expectancy approaches.” [1]

Generally the mention of a “failure rate” is interpreted to mean failures occurring on an annual basis.  Thus, for one million deployed smart meters, 5,000 of them can be expected to fail, on average, each year but with a greater percentage occurring just following deployment and towards the end of life expectancy.

Testing a small sample of smart meters only demonstrates that those particular meters and that specific model of smart meter does not exhibit any obvious manufacturer defects based upon the level of testing performed.  But the characteristic failure rate of 0.5% (or so depending on the model) is still expected.

The problem with smart meters is that they have a greater chance of failing catastrophically when they do fail as compared with analog meters.  Smart meters have multiple modes of failure, such as when an electronic board short-circuits and causes an explosion.  There are no electronics in an analog meter.

As described by a consultant to the Saskatchewan government in Canada:

“When we are talking about a catastrophic meter failure, we are referring to a meter which has burnt, melted, blackened, caught fire, arced, sparked, or exploded.”

When a catastrophic smart meter failure occurs, depending on the circumstances, such as nearby combustible materials available, there is a chance that your house will burn down.

The increased risk of fires with smart meters cannot be denied and is blatantly obvious … even as explained by Underwriters Laboratories (UL) documents that describe the new testing standard developed specifically for smart meters:

“This [new] standard was developed to address problems that have been reported from field installations of smart meters, including fires, meters ejecting from meter socket bases and exposed live parts.   When electronic components are overstressed, there is a potential for the components to explode.”

Again, there are no electronics in an analog meter.

Additionally, as explained in another article at this website late last year:   Analog Meters Withstand “Hot Sockets” Better Than Smart Meters.  When smart meter fires do occur, utilities will many times blame the “customer’s wiring” and a condition called a “hot socket.”  But as has been shown, even if this is sometimes true regarding the “hot socket” issue, the smart meter likely contributed to the eventual catastrophic meter failure as compared to what would have occurred with an analog meter.

In attempt to mitigate the increased fire risk with smart meters, the smart grid industry has recently begun to employ the use of temperature sensors within the smart meter to detect when a smart meter might be ready to catch fire or explode.  The use of these sensors is still a “work in progress” as in most instances the utilities are utilizing sensor and control functions initially designed to protect overheating electronics; they are now attempting to additionally use these sensors as a fire prediction indicator for the entire meter.   To provide further insight on this issue, an audio excerpt from a discussion among smart grid industry representatives is provided below.   Note that a utility representative states the following regarding the use of temperature sensors within a smart meter:

“Is this a blip or is this a house burning down? …  It’s an indicator, not necessarily a fire alarm.”

The above audio recording may be considered copyrighted by its source, and therefore, it is provided in an anonymous fashion and declared “fair use” pursuant to the Fair Use Doctrine under 17 U.S.C. 107.  It is presented in the public’s interest for non-commercial purposes.  SkyVision Solutions stipulates the audio excerpt is from a discussion initially recorded in the year 2014.

As a reality check, if you have any doubts on whether smart meters represent an increased fire risk to homeowners, please watch the following video, initially recorded last year after Fire Chiefs for towns in Nevada voiced concerns regarding the number of blazes related to smart meters.  As previously reported, a forensic investigator examined a number of failed meters.  He found evidence that each of the meters did fail, and in one case wrote:  “It is probable the Arletta meter did fail, resulting in the ignition of the fire.”

[The above video contains material used pursuant to the Fair Use Doctrine under 17 U.S.C. 107 and is presented in the public’s interest for non-commercial purposes.]

As another reality check, does it seem appropriate that Nevada smart meters that can burst into flames at any moment (based upon past experience) be declared “safe” based upon UL sample testing results?

What is particularly disturbing is how utility personnel and manufacturers continually deny any smart meter-related fires. 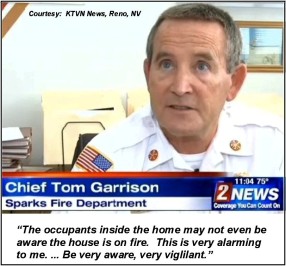 In some cases, this denial involves the use of deceptive terminology and semantics.   For example, NV Energy uses the term “consumed meter” for cases when a smart meter bursts into flames, refusing to call it a fire or catastrophic meter failure.  Until we can at least have utility personnel refer to a smart meter fire as actually “a fire,” rather than a “consumed meter,” we are not going to make much progress on this issue in terms of improving public safety.

In summary, the problem with smart meters is that they have a greater chance of failing catastrophically as compared with analog meters.  This substantiates the claim that smart meters represent an increased risk of fire to homeowners and to all members of the public.

[1]  “The Executive Guide to Unlocking the Full Value of Your Meter Data,” Elster Solutions, 2014.