Posted on April 8, 2015 by SkyVision Solutions

Utility smart meters invade consumer privacy.  The degree of privacy invasion is directly proportional to the granularity and nature of the data collected by the meters.

Most utilities in the United States and Canada appear to be oblivious to these privacy invasions or intentionally deceive the consumers by telling them just the opposite, i.e., that smart meters do not affect personal privacy.  However, during the development of its smart meter program, one major municipal utility did recognize the possible privacy implications of collecting granular energy usage data.

For the City of Fort Collins, Colorado, documents retrieved from July 2011 state the following with regard to “Modernizing Water and Electric Infrastructure”:

“The upgrade of existing utility meters has raised concerns for some customers about the costs, health effects and privacy and security of the information broadcast by the meters. …

–  Placing customer information at risk
–  ‘The Utility will know what I’m doing when’
–  The meters can be hacked.

The City of Fort Collins Utilities takes customer privacy very seriously and has for many years.  We recognize that emerging technologies open new avenues of risk. …

Although Utilities is implementing best practices in relation to protecting privacy, we will also offer … options to customers that would receive daily usage data transmitted from the meter or to have a meter manually read once per month; this would address the needs of those customers who still have continued privacy concerns.”

The normal default data collection frequency for a Fort Collins smart meter is once every 15 minutes.  The table below summarizes the program and options for collecting utility meter data in Fort Collins, i.e., every 15-minutes, daily, or once per month.  The once per month read involves a non-transmitting digital meter for which the City charges an extra fee of $11 per month. 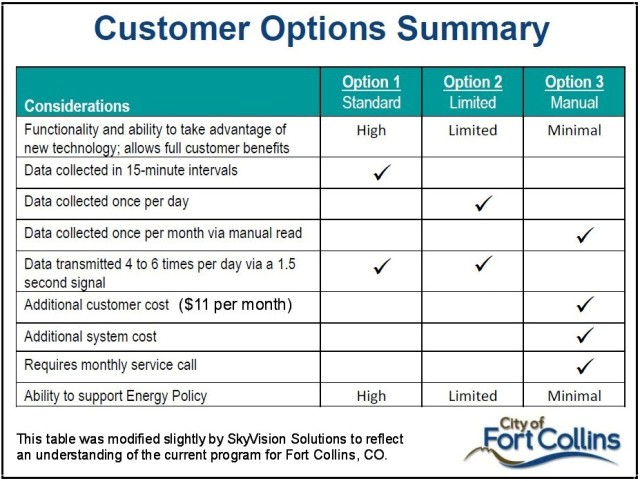 The City of Fort Collins prepared sample data load profiles for meters collecting data at intervals of every 15 minutes, once per hour, once per day, and once per month as shown below.

Surprisingly, regarding the above information, the City of Fort Collins concludes:

“The data received via the advanced meters does not provide information at a level of detail that would provide insight into specific activities.”

SkyVision Solutions strongly disagrees with the above conclusion.  Particularly for the 15-minute collection frequency, data can be analyzed in a manner consistent with that previously provided at this website for data collected in the City of Naperville, Illinois.  Detailed analysis of granular data collected and retained via smart meters over time can reveal significant personal details about the lives of electric customers via two principal mechanisms, specifically:  intuitive observation and disaggregation algorithms.

“Intuitive observation” represents a reasonable inference based upon a review of load profile information where patterns are identified related to the level of power consumption, its intermittency, and its duration.  As stated in a paper entitled, “Private Memoirs of a Smart Meter,” prepared by members of the Department of Computer Science, University of Massachusetts Amherst, even without the use of sophisticated mathematical algorithms and analyzing just household real power readings alone is sufficient to reveal a range of information, such as when people are at home, sleeping routines, eating routines, etc.

As an example of load profile information, the 15-minute interval usage numbers for April 26, 2013, utilizing granular data collected and retained by the City of Naperville for a representative electric customer of the City, were graphed as shown in the figure below.

Without special software or other analytical tools, it is easy to infer human behavior from the graph above.  It is clear that persons within the home arose at 4:30 a.m., started their day with the typical activities of bathing and meal preparation.  It is also clear that there is no human activity between 8:30 a.m. and 3:00 p.m., and further that the usage reading abruptly drop off at 10:15 p.m. indicating that the family is retiring for the evening.  While the above graph cannot determine exactly what appliances are being used, the graph clearly reveals discrete human behavior within the home, information of this nature would be unobtainable by someone merely observing from the street.

“Disaggregation algorithms” are a bit beyond the intended scope of this blog article, but recently a company called EEme released the following information:

“EEme disaggregated a year’s worth of 15-minute smart meter interval data, and was able to achieve about 70 percent accuracy in its estimates of air conditioning, water heater, clothes dryer and dishwasher energy use, … That’s on par with what other disaggregation technologies have been able to get out of 15-minute whole-home meter reads, according to tests from the Electric Power Research Institute (EPRI)…

Note:  The term “disaggregation algorithm” refers to a set of statistical approaches for extracting end-use and/or ‘‘appliance level’’ data from an aggregate, or whole-building, energy signal.

In addition, as stated in a presentation by an EPRI representative in August 2013:

“Complex algorithms and technologies [are] being commercialized.  Disaggregation performance [is] expected to improve.”

It is hoped that this article brings to light how one utility considered the privacy concerns of the consumer in developing its smart meter program.  The good aspect of the program is that it does allow a true choice on data collection options.  The City of Fort Collins acknowledges the privacy “concern,” yet it appears not to fully understand the true privacy risks associated with smart meters.  In addition, reports from the field indicate that the City of Fort Collins did not formally advertise the privacy options to its customers.  Evidently, individual customers were made aware of the options once they objected to the detailed 15-minute collection frequency.  That said, Fort Collins did take credit for their program at a recent DistribuTECH conference in San Diego, CA, where it was reported:

“They had done their research, and predicted that they would receive customer pushback, so they implemented a customer choice program.”

“Fort Collins decided to offer different options to their customers, ‘based on privacy,’ which included things like when and how data is collected.  These programs caused alternate programming dependent upon customers — meter, web portal, and metrics reporting.  There were three options in meter reading — every 15 minutes, every 24 hours, and monthly — on premises.”

We need all utilities to acknowledge the privacy concerns and risks associated with smart meters; we need all utilities to offer a true “customer choice program.”  The Fort Collins program is one possible solution to the privacy problem that could be utilized by other utilities.  This program should be accompanied with appropriate awareness information such that customers can make an informed decision on which option is best for them based upon their individual risk tolerance.

To supply additional information related to the smart meter program for Fort Collins, CO, a portion of an e-mail forwarded to SkyVision Solutions is reproduced below that was dated February 9, 2015, from a City of Fort Collins representative:

“Before deployment, Fort Collins Utilities described the choices that would be offered to support customer concerns at a City Council work session on 12 July, 2011.  The options are described on pages 1 and 2 of the Agenda Item Summary available at the following link:
http://citydocs.fcgov.com/?cmd=convert&vid=72&docid=1749676&dt=AGENDA+ITEM&doc_download_date=JUL-12-2011&ITEM_NUMBER=04

Because the meters used to accomplish monthly interval reads do not have radios in them, those reads are accomplished manually, by sending a meter reader to the premise to read the meters.  Thus, an $11 service charge is in place to support those expenses.  There is no service charge associated with the 24-hour interval option.  To support the need to improve measurement accuracy, electromechanical meters were replaced with solid state (electronic) meters.  The generally accepted definition of a ‘smart’ or ‘advanced’ meter is a meter that is capable of 2-way communication between utilities and customers.  By that definition, the solid state meters used for customers choosing the monthly interval option are not smart meters.”

“Private Memoirs of a Smart Meter,” at http://lass.cs.umass.edu/papers/pdf/buildsys10.pdf

“Startup Goes Public with Its Energy Disaggregation Results,” at http://www.greentechmedia.com/articles/read/eeme-goes-public-with-energy-disaggregation-test-results