Posted on August 30, 2014 by SkyVision Solutions

Introduction to the Documentary Film

“When business leads research, can we still trust science?”

For the past ten years worldwide, questioning on the safety of mobile phone antennas has been increasing.  Numerous scientific studies have revealed the adverse effects of electro- magnetic waves on health.  Yet, most health agencies, industry representatives, and a portion the scientific community claim that current health standards adequately protect the public.

Earlier this year journalist Nancy Meritens  and film director Jean Hèches completed their documentary Ondes, Science et Manigances [or Microwaves, Science and Lies], that demonstrates how the telecommunications industry creates doubt about harmful radiofrequency waves through the manipulation of science.

Through interviews with several whistleblowers, including citizens, journalists, and scientists, this film reveals how, like the tobacco industry, the lobby of the mobile phone industry has built a strategy of “product defense” by artificially creating a scientific doubt about the harmful effects of electromagnetic waves.  In addition to revealing collusion among various organizations including the World Health Organization (WHO), the film documents the actions of specific individuals like Emilie van Deventer of the WHO and Peter Valberg who works for the product defense firm Gradient.

The film has implications far beyond the cellular phone, cell tower, and microwave radar technology that it primarily addresses.  Once people on a wider scale begin to understand that their cell phones are not as safe as they thought and that information on the hazards of such technology is effectively being suppressed, people will begin to more easily question the safety of radiofrequency emissions from other technologies such as Wi-Fi and utility smart meters.

The film itself is very supportive of the plight of electrosensitives in a society where our environment is increasingly being saturated with RF waves.

Subsequent to the WHO’s International Agency on Research for Cancer (IARC) declaration in 2011 that radiofrequency fields are possibly carcinogenic, the WHO actually took actions to downplay the declaration of its own agency, specifically through a revision to the WHO Fact Sheet N°193.  These types of issues are comprehensively discussed in the new documentary film, in this instance, showing how the WHO takes actions to support the telecommunications industry rather than public health.

SkyVision Solutions has received permission from the film makers to present a specially created video excerpt from the documentary film Microwaves, Science, and Lies.  This film clip (below) is presented to help substantiate the assertion that collusion exists between the WHO and the telecommunications industry.  In fact, what the video clip shows can be described as follows:

The head of the WHO EMF working group is a known industry insider and she (or her people) changed the wording of Fact Sheet 193 in a manner such that every wireless technology company can now use it for protective legal cover.  Furthermore, the IARC has requested that the Fact Sheet wording be “corrected,” but that request has been ignored by the WHO.

For introductory purposes, this 7-minute film clip has been named, “A Critical Review of the World Health Organization (WHO) Fact Sheet # 193.”

After seeing the above film clip, SkyVision Solutions asserts that rather than the biased statement made by the WHO that:

“To date, no adverse health effects have been established as being caused by mobile phone use.” …

It would be much more accurate for the WHO to state the following (based upon the IARC declaration): 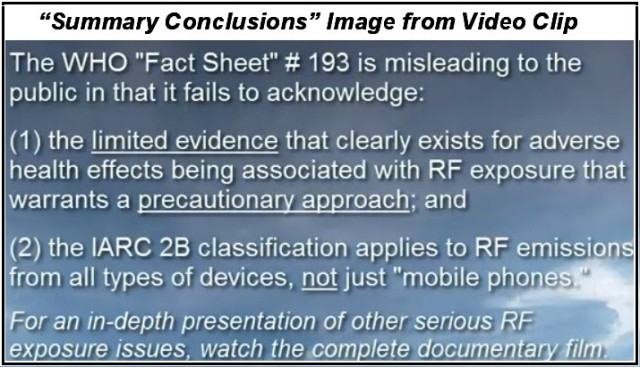 [Note:  SkyVision Solutions believes that more than “limited evidence” exists to demonstrate adverse RF-related health effects, but the above language is consistent with the Group 2B IARC declaration.]

Update:   In October 2014, it was noted that the WHO made editorial updates to Fact Sheet # 193 but did not correct the information mentioned by Dr. Baan in the film documentary.  The WHO updated the estimated global mobile phone subscriptions from 4.6 billion to 6.9 billion and indicated plans to complete a formal risk assessment of all studied health outcomes from RF fields exposure by 2016 instead of 2012.

The documentary film (92 minutes in duration) was initially made in French but was quickly followed with an English version as well.

The English version of the film can be rented online through Vimeo at:  http://vimeo.com/ondemand/17755/89417454, and the official trailer is shown below.

Bonus videos are included as part of the film documentary DVD.  One such video clip is presented below regarding Peter Valberg and the “Product Defense Strategy.”  This is likely material that did not make the final cut for the film.

SkyVision Solutions has also compiled an English version of the film trailer that does not require subtitles, as provided below.  This version is more representative of watching the actual film documentary.