Posted on February 14, 2014 by SkyVision Solutions

A fast-moving apartment building fire occurred on Thursday, February 6, 2014, in Bensalem, Pennsylvania when at least one smart meter exploded and caught fire.  Thirty (30) residents were displaced by the ensuing blaze at Bensalem’s Thunder Hollow apartments.  Sixteen (16) apartments were affected.  One firefighter was injured.  According to the Bucks County Courier Times, the Bensalem Battalion Chief Robert Sponheimer said the fire started in a utility meter in an outside shed that housed electrical meters.  He also said “residents reported hearing a loud bang, then losing power Thursday evening.  Within minutes they saw smoke pouring out of the shed.  The fire then spread to the building and its roof.”

Dramatic camera footage exists taken soon after the fire started, during the fire fighting activities, and during the recovery efforts, making you feel as if you are “on-the-scene” as it happens.  In the first video where you see the dramatic flames about 25 to 30 seconds into the video, they are emanating from an outdoor shed containing smart meters.

Reporting from most news sources indicated that the cause of the fire remains under investigation.  However, on-scene reports indicate that the fire was electrical in nature and was started by a fire in “a utility electric meter.”  These apartments are known to be equipped with smart meters.  …  SkyVision Solutions finds it curious that the term “smart meter” was not used in original reporting of the fire since that would be a natural question to have asked and have reported to the public.

One resident lives just a few feet from two sheds where individual smart meters are housed.  “I heard this boom and it sounded like a shotgun going off,” said the resident. 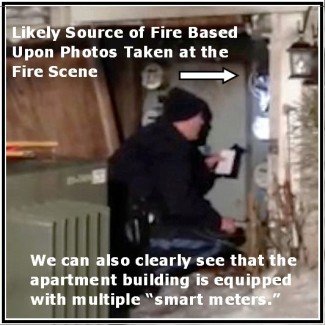 In the figure shown to the right, an officer as part of an investigation is shining a flashlight toward the two upper smart meters located on the right side of the outdoor shed.  The upper most smart meter looks completely deformed (despite the somewhat poor resolution of this photo).  There appears to be melted plastic drooping down from what would be the normal meter location.  There is also blackened area at the top, where smoke, sparks, and fire previously billowed outward and upward.  Clicking on the photo will provide a somewhat better view.  From a curiosity perspective, it would nice to have a close-up photo view of the affected smart meter to better examine how bad it really looks, but there is little doubt on what actually happened at this point.

Based upon a report in the Bucks County Courier Times, Battalion Chief Robert Sponheimer plans to meet with PECO Energy and township code officials to continue an investigation into a “meter malfunction.”  The fire has also reportedly been ruled an “accident.”  This determination is actually important in that it means the fire has been determined not to be the work of arson or meter tampering.

SkyVision Solutions has sufficiently reviewed the details surrounding the fire to confidently conclude and report that the cause of the fire was indeed a “smart meter.”  It would appear that officials just don’t want to advertise this important detail concerning the fire.

The video provided below will not specifically discuss smart meters but does help demonstrate the damage, havoc, injury, and potential loss of life that can be caused by smart meters.

[The above video is presented in the public’s interest and contains material used pursuant to the Fair Use Doctrine under 17 U.S.C.]

Bensalem Battalion Chief Robert Sponheimer is no stranger to the topic of smart meter fires.  He seems to have been trying to do the right thing.  Look at what he said back in September 2012. ….  At one point he says, “we were lucky so far,” based upon the limited damage resulting from the smart meter-related fires.

[The above video contains material used pursuant to Fair Use Doctrine under 17 U.S.C.]

One source of information for this blog posting: http://www.buckscountycouriertimes.com/news/local/electric-meter-blamed-for-bensalem-apartment-fire/article_93cf65bb-a298-5978-a88e-464c2f4451e1.html

Follow-up reporting by one news outlet (the Bucks County Courier Times) that an electric meter was responsible for an apartment building fire brought to light the fact that a smart meter caused the events described in this blog posting.  One wonders how many other fires have been caused by smart meters but were never reported as such.  In fact, in many cases, fire investigation is basically done to rule out arson and the average investigator is not trained or qualified to determine conclusive origin and cause of electrical fires.

Many laypersons don’t know what smart meters are, and during the first video above, it could be heard in the background that a woman was calling for help because a “transformer blew,” not knowing that what was housed in the outdoor shed were smart meters, not transformers.

A review of social media in the Bensalem, PA area during the timeframe of the fire and subsequent to the fire reveals reporting by both the fire department and from residents.  High praise was given to the firefighters.

Company has been transmitted to Thunder Hollow Apartments for an apartment fire.  … Heavy smoke showing, going in service.

… Last nights fire at Thunder Hollow displaced 14 families; 5 apartments had fire damage while 11 apartments had smoke and water damage. 1 FF suffered a minor injury on the fireground.  All crews did a great job as did Bensalem EMS, Bensalem Police and Bensalem Fire Police.

One building away.  Hearing electrical [as cause] but no body is sure. … Thank you [firefighters] for making the Thunder Hollow Fire much less than it could have been.

From One Local Celebrity (as posted on Facebook page):

Hey everyone, I have something important to share:  You may have heard about this big fire which caused 30 of my neighbors to lose their homes … http://abclocal.go.com/wpvi/story?section=news%2Flocal&id=9422638
The cause of this and many other fires around the world is related to the new electrical “Smart Meter”.  These new meters, typically if installed in older homes with older wiring can cause problems.  So please, everybody, check the meters at your house or apartment, no matter where you live, and if you do have a “Smart Meter”, ask for a professional inspection.  Share this with as many of your friends and lets get the word out.

I thought they changed all those bad meters.

… My thoughts exactly.  … I would like to know if theses were the upgraded meters.  My fear is peco putting my old house at risk; it would burn up fast.

Officially, this smart meter-related fire is still under investigation.  The company involved with insuring the Bensalem apartment buildings reportedly requested an independent evaluation of all smart meters installed for the burned building.  Current smart meters were removed/ replaced for such an evaluation.  It is hoped that another update can be provided at future date as to the results of the independent evaluation and any actions taken as a result of the Bensalem apartment building fire.  [It is possible, however, that the results will not be made public.]

Also, as a matter of public record, there was a Pennsylvania Legislative House Policy meeting held on April 14, 2014 on the subject of “Security in Installation of Smart Meters.”  Presentation materials for that meeting indicate: “The meter itself is the cause of the Bensalem fire, not arcing and not the wires, per the Bensalem Fire Marshal.”

The aftermath of the February 2014 smart meter fire in Bensalem continues.

A resident of the Thunder Hollow apartments reported to SkyVision Solutions that 17 months after the fire, the damaged apartments are still unoccupied and undergoing renovations.  It was also reported that individuals carrying clipboards were today inspecting the new smart meters that had been installed subsequent to the February 2014 apartment fire.  Less than an hour later, coincidentally, a fire started at the apartment complex, and fire fighters were called as described below.

“The fire at Thunder Hollow apartments temporarily displaced one resident because the other units — including the one where the fire started — are under renovation after being damaged in a fire last year, Robert Sponheimer said.  No one was injured.”

“The maintenance workers were sweating pipe in the kitchen of the unoccupied apartment when the wall caught fire around 2 p.m., he said.  The complex does not have fire walls, which are cinder block walls that separate apartment units, but it does have fire partitions that extend to the attics located in the middle of apartment unit rows, Sponheimer said.”

“A major fire that started in PECO electric meters seriously damaged 16 apartment units at the complex in February 2014.”

It is noted that the Bucks County Courier Times removed the reference to the “PECO electric meters” late in the day (11:09 pm local time); so that there is no doubt that the above quotations are accurate, here is a link to an image of the original story:  Bensalem Apt 02 July 2015 Fire Article