Posted on October 5, 2015 by SkyVision Solutions 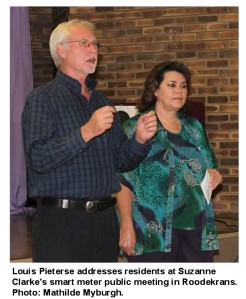 A mob of infuriated residents had representatives from City Power cornered at a public meeting on smart meters last week.

“It would be to the benefit of us all if you take your smart meters and shove ’em,” an elderly resident said after reciting his complaint for the umpteenth time in front of the representatives.

The meeting was called by Ward 83 councillor Suzanne Clarke after she was inundated with smart meter complaint calls, some from as far as the northern suburbs, she told the Record.

Representative Louis Pieterse tried to explain billing issues are due to the billing department being absorbed by the City of Johannesburg’s Revenue department, but residents would have none of it.

Many had signed a petition, which Clarke will hand over to CoJ [City of Johannesburg], by the end of the night but other possible solutions were also discussed.  Initiating a civil law suit against the entity prevailed, but other residents said they’ll be happy to have the meters removed or switch to prepaid meters.  City Power said they’re willing to hold an open day.  Residents have requested legal council at the next public meeting.

The allegations against City Power and Revenue: