Posted on March 5, 2015 by SkyVision Solutions 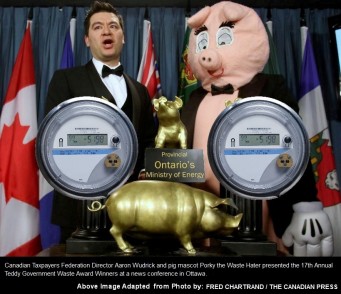 The Teddy, the pig-shaped award given annually by the CTF to government’s worst waste offenders, is named for Ted Weatherill, a former federal appointee who racked up almost $150,000 in miscellaneous expenses – including a $700 lunch for two people – and was fired in the late 1990s.

“We’re tough on all government waste, but sometimes the best way to strike a nerve is to tell some of the most absurd stories,” said Wudrick. “And sadly, the capacity for government to dream up new ways to waste money seems infinite.”

“And I have the Provincial envelope here.  … The winner is … Ontario’s Ministry of Energy, for their ‘not so smart’ meters.   Congratulations and condolences to the taxpayers of Ontario.”

Under a 2004 plan developed by the Ministry of Energy to reduce energy consumption, Ontario’s electricity distributors have installed 4.8 million smart meters across the province.  But Ontario’s Auditor General revealed that the cost of installing these meters had reached $1.9 billion – nearly twice the original estimated cost, with still more costs expected.  The smart meters charge more for electricity during peak hours and less for off-peak hours, the idea being that electrical demand can be shifted and fewer  power generation plants will need be constructed in the future.

In addition to being over budget, the new smart meters also seem to be causing fires. Ontario’s Fire marshal linked 23 fire incidents to smart meters. (Smart meters have also been causing fires in Saskatchewan, and they were forced to remove more than 100,000 of them.)  Ontario is only removing 5,400 smart meters so far.

Worst of all, the smart meters haven’t worked (sometimes literally:  812,000, or about 1/6 of all smart meters, have never transmitted to the provincial data center at all):  power use hasn’t dropped during peak periods; it has actually increased slightly.  The Auditor General noted that “projected net benefits of at approximately $600 million over 15 years were significantly overstated by at least $512 million.”  Add in the massive cost overrun, and taxpayers are still out nearly a billion dollars for a project that by any empirical measure has been a complete disaster.

“Ontario has certainly provided a raft of egregious examples of waste in recent years,” continued Wudrick.  “But the smart meters boondoggle ticks off so many eye-watering boxes: massive costs; unintended consequences; poor value for money, and of course a total failure to achieve the original policy objective.”

The Provincial Energy Minister in Denial

—  ‘Smart’ Meters Have Failed and Were a Dumb Investment

Despite the overwhelming evidence that smart meters have failed as an unmitigated disaster, especially in Ontario, the Energy Minister is still in full denial.

Energy Minister Bob Chiarelli says that the government may just need to increase the cost differential in time-of-use electricity to further force people to reduce their energy usage or switch electricity use to off-peak times.

Time-of-use rates are, of course, part of the problem, not the solution in terms of helping the consumer.

The Canadian Taxpayers Federation may be motivated by good intentions but Chiarelli said he takes the group’s findings with a grain of salt.  “The story of smart meters is a good story,” he said.  The meters have eliminated the need for distribution companies to pay staff to walk door-to-door for readings, Chiarelli said.

Subsequent to the above statement by the Energy Minister, social media lit up with Tweets on how Chiarelli is apparently bragging about the one “benefit” of smart meters he could find, i.e., that utility companies have been able to lay off thousands of meter readers.  How out of touch with reality can one person be?

The CTF government “waste award” brings to mind some recent comments by Timothy Schoechle, Ph.D. in characterizing the statements in the United States from a senior Department of Energy official:

“We had a huge amount of money that had to be spent on smart grid, and we didn’t have anything off-the-shelf that we could call smart grid except these meters that were designed 20 years ago.”

With this type of mindset, you can definitely understand how the latest investments in smart meter technology represent a huge waste of money.  Rather than continuing with the current misguided boondoggle projects for smart meters, let’s use the money to actually do something worthwhile in terms of improving the utility infrastructure.

By any objective measure, smart meters expose the consumer to many more risks than benefits.  It is hoped that the Ontario government “waste award” (and its symbolism) will resonate with consumers not just in Ontario but around the world.

Source Links for this Article