Congressional Testimony: ‘Smart’ meters have a life of 5 to 7 years.

Posted on October 29, 2015 by SkyVision Solutions 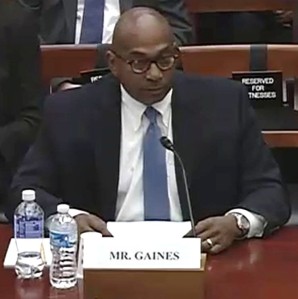 Testimony was provided last week (October 21, 2015) at a Congressional hearing regarding “cybersecurity for power systems.”  A surprising admission was provided by one of the expert witnesses that I will discuss here in this article.

Mr. Bennett Gaines testified on behalf of FirstEnergy Service Company.  He is a Senior Vice President and the Corporate Services and Chief Information Officer.

Although acknowledging some increased cybersecurity risks due to ‘smart’ meters, Mr. Gaines stated, “But I don’t see it as a huge threat.”

Then, however, Mr. Gaines made a surprising statement regarding the life expectancy of ‘smart’ meters as compared to existing traditional meters:

“These devices are now computers, and so they have to be maintained.  They don’t have the life of an existing meter which is 20 to 30 years.  These devices have a life of between 5 to 7 years.  And so the challenge that the industry has is making sure they maintain their smart grid environment, not neglect it.”

Before proceeding, please watch the video testimony (less than 2 minute clip) for you to gain proper context of the statements:

Although Mr. Gaines doesn’t provide an explanation for the short lifetime of the ‘smart meter’ as compared to a traditional meter, the discussion as it pertains to cybersecurity probably means that the computer-like nature of the ‘smart’ meter device causes a technological obsolescence which is independent of whether or not the ‘smart’ meter will actually function for longer periods of time without significant operational failures; thus there is the need to “maintain” a secure “smart grid environment” by upgrading the devices and not neglecting them.

One source I normally quote regarding electric meter expected lifetimes is TESCO, an electric meter testing equipment and services company.  Tom Lawton from TESCO in a 2014 presentation indicated that:

“Electro-Mechanical Meters typically lasted 30 years and more. Electronic AMI meters are typically envisioned to have a life span of fifteen years and given the pace of technology advances in metering are not expected to last much longer than this.”

Mr. Gaines from FirstEnergy may be communicating that it is not just a matter of retiring ‘smart’ meters in order keep pace with technological advances but also to counter a more critical technological and/or cyber threat induced obsolescence.

You can see why I think it is a big deal for a utility executive to mention that the life of a ‘smart’ meter is only 5 to 7 years.  A value of 15 years or more is usually utilized in utility cost-benefit analyses for ‘smart’ meter deployments.  For example, in Illinois, a Commonwealth Edison press release in 2012 states the following:

“Smart meters also will enable ComEd to achieve greater operational efficiencies, savings that will be passed on to customers.  These efficiencies could save customers $2.6 billion over the 20-year life of the smart meters, according to a cost-benefit analysis by Black & Veatch, a consultancy that evaluated operational cost savings as part of the plan that was filed with the ICC.”

Somewhat shockingly, I found a presentation for Memphis Light, Gas and Water (MLGW) from 2013 mentioning a “25 to 30-year expected equipment life for electric and gas meters” as part of its “Smart Meter 2020 Vision.”

Are Current Utility Economic Analyses Based upon Valid Assumptions? Probably Not!

Economic analyses may not be worth the paper they are printed on if the assumed device lifetimes are not correct, and, in fact, if the actual expected lifetimes are off quite significantly.  Recognition of this possibility appears to have been made by Northeast Utilities (now Eversource Energy) in its 2014 filing with the Massachusetts Department of Public Utilities where it states:

“Given that the grid modernization technology sphere is a dynamic, rapidly evolving marketplace, it is also unclear whether the incremental benefits, if any, would begin accruing to customers prior to the implemented AMI platform being rendered obsolete.  In any event, the cost remains unjustified by the benefits.”

“The estimated useful life for a typical smart meter is 15 years, compared to 40 years for an analog meter.  The dis­tribution companies we consulted said the 15-year estimate is overly optimistic because smart meters:

— are subject to significant technological chan­ges, making it difficult to maintain hardware and software for the first-generation meters, which do not have the advanced functions of newer models;

— have complex features, such as radio com­munications and digital displays, which are subject to higher malfunction and failure rates;

— are similar to other types of information tech­nology, computer equipment and electronic devices in that they are backed by short war­ranty periods and require significant upgrades or more frequent replacements as the technol­ogy matures; and

— will likely be obsolete by the time they are re-verified as required by the federal agency Measurement Canada every six to 10 years.”

We thus have additional information consistent with the Congressional testimony of Mr. Gaines from FirstEnergy.

I have continued to raise questions about the supposed benefits of ‘smart’ meters as compared to traditional meters.  Although most traditional meters do not have advanced functionality, they expose consumers to few if any risks, and the Electric Power Research Institute (EPRI) properly described them as “an amazing of piece of engineering work” as previously reported in a separate article at this website.  More fully, EPRI stated:

“By anyone’s assessment, traditional electromechanical meters are an amazing piece of engineering work.  Refined over a hundred years, the design of a standard residential electricity meter became an im­pressive combination of economy, accuracy, durability, and simplic­ity.”

In addition, as Mr. Gaines stated, the current traditional meters could be expected to last 20 to 30 years.  The Auditor General for Canada mentioned a 40-year lifetime.

Adding insult to injury so to speak, the current traditional meters are being retired and replaced with ‘smart’ meters  well before their useful lifetimes have expired, further wasting taxpayer and/or ratepayer money.  Again referencing the Ontario Auditor General’s 2014 report:

“The installation of about 4.8 million smart meters in Ontario rendered millions of conven­tional analog meters obsolete, making it necessary to retire and dispose of them sooner than planned. The distribution companies we consulted said the analog meters they had to scrap were still in good shape and could have been used for another five to 16 more years. The expense of scrapping analog meters became part of the so-called stranded costs, added to the costs of procuring, installing and operating smart-metering systems.”

More consumers, consumer groups, and public utility commissions need to be questioning the assumptions used for ‘smart’ meter project economic analyses.  Those based upon inflated values of smart meter lifetimes of 15, 20, or even 30 years are way off base.  Has anyone in the utility industry ever heard of the term due diligence?

In closing, I have generally held the belief that at some point in the future it was likely that a truly ‘smart’ meter would eventually be invented allowing a safe and efficient transition of utility electric meters to the digital age.  I just knew we weren’t there yet considering the current technology.  Based upon the information contained in this article I am no longer sure that is possible.  It is not economically viable as a strategy to place hackable, wireless 2-way communicating “computers” on the sides of millions and millions of homes at a cost of billions and billions of dollars.  This is an effort which is doomed to financially fail based upon the accelerated obsolescence which will occur within a few years.  In many cases, the meters may already be obsolete by the time a large utility deployment has been completed.

A follower of this website forwarded me a link to a 2012 IRS National Office Technical Advice Memorandum which provides favorable tax treatment for what would appear to be today’s version of a programmable, networked, 2-way communicating smart meter, referred to as “Meter 2” within the IRS Memorandum.

Specifically, smart meters (as Meter 2) have “a class life of 6 years” based upon a determination that they fall within the classification of an “information system.”

Based upon the information contained in this blog article, I have since generally stated that I consider smart meters as having an expected lifetime of somewhere between 5 to 10 years, considerably less than the assumptions that utilities use within cost benefit analyses.  The IRS Memorandum further supports this assertion.

The IRS Memorandum acknowledges the technological nature of smart meters as “information systems” that have fairly short expected lifetimes and would appear to allow utilities to depreciate smart meters in the U.S. over a period of 5 years for tax purposes and where they may have elsewhere assumed they will have a useful lifetime of between 15 to 20 years for business case purposes.  Specifically as stated at a PwC website:

I am adding reference to a somewhat dated article from 2012 regarding “Krebs on Security” detailing an FBI Bulletin on smart meter hacking in Puerto Rico.  The article is primarily about electricity theft, but my recent re-reading revealed a section adding support to the assertion that smart meters won’t have the expected lifetimes that many utilities may think:

Liston said utilities have become accustomed to deploying meters that can last 30 years before needing to be replaced, but that the advanced interactive components being built into modern smart meters requires a much more thoughtful and careful approach to security.

“Traditionally, metering technology has been very cost effective, because much of it is very resilient.  But these older devices didn’t have a lot of technology in them, and they certainly didn’t have wireless connections and things like memory storage,” Liston said.  “The utilities are still expecting the lifecycle of newer pieces of equipment to be 20 to 30 years, and they’re just coming to the realization that some of new stuff deployed is not going to last nearly that long.”

“Meter Operations in a Post AMI World,” TESCO; Field Notes by Tom Lawton, slide 5 at http://www.slideshare.net/bravenna/meter-operations-in-a-post-ami-world-36336258?related=1; also note that slide 14 states, “No one knows the actual life of their AMI meter.  To do this we must learn as much as we can from the failure and performance of the meters we have deployed.”

“Utility Industry Aware of Safety and Accuracy Issues with Digital Meters for Years,” at https://smartgridawareness.org/2015/06/29/utility-industry-aware-of-issues-with-digital-meters-for-years/

13 Responses to Congressional Testimony: ‘Smart’ meters have a life of 5 to 7 years.