The headline at SmartGridNews.com on May 15, 2014, was “Now utilities can tell customers how much energy each appliance uses (just from the smart meter data).” [emphasis added] 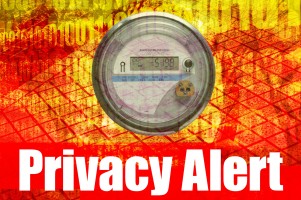 The above admission on what utilities can do with smart meter data is nothing new to those citizens who have opposed smart meters from the beginning.  In March, for example, SkyVision Solutions wrote a blog article and issued a detailed report entitled, “New and Definitive Report: Smart Meters Do Invade Privacy” which exposed the propaganda of the smart grid industry for what it is.

Exposing the Propaganda and Lies

Using smart meters, utilities expose consumers to unnecessary risks by collecting massive amounts of data not necessary for billing purposes simply because “they can” and do so without regard to consumer privacy and security interests.  Smart meter data, consisting of granular, fine-grained, high-frequency type of energy usage measurements, can be used by others either maliciously or inadvertently using existing or developing technology to infer types of activities or occupancies of a home for specific periods of time.  In a general sense, analysis of granular smart meter energy data results in or may result in:

With regard to informing consumers of smart grid risk-related information, utilities and manufacturers have no incentive to inform consumers of these risks since such action would create an even greater consumer backlash against the deployment of the smart grid technologies.  Risk-related information is being deliberately suppressed by the smart grid industry, and the public is being provided misinformation which would indicate that there are no additional privacy or security risks related to smart meters as compared to the old analog meters.

What follows are specific examples of utility and smart grid industry misinformation. Information disseminated by the Smart Grid Consumer Collaborative (SGCC) is available on a number of utility websites and often includes the following statement from a “Data Privacy and Smart Meters Fact Sheet’ available at:  http://wp.me/a3nav9-1G6 (first sentence in conclusion):

“The privacy of electricity usage data is protected now and that will not change with the use of smart meters.”

The above statement is basically an oxymoron because it conflates the terms privacy and confidentiality.  Once someone else, even the utility, has your private and personal information, it is no longer private.  What utilities can legitimately say is that they will attempt to keep your personal and private information “confidential” to the extent that their systems, programs, and the laws allow.  If a consumer allows the utility to collect granular data that can reveal activities or occupancy of the home, then that consumer has lost a considerable degree of privacy.

The SGCC has also produced a video on smart meters (named “Separating the Facts from the Fiction about Smart Meters”).  On the topic of privacy, the following words are spoken in the video:

The above statement is a childish, simplistic treatment of the subject matter.  Obviously, an inanimate object can’t “know” anything.  That is not the issue.  The issue relates to the incremental and granular type of data that is collected and transmitted by the meter to places where it can be intercepted and stored and analyzed by others (real people) to be able to provide information (as mentioned previously) about human behavior patterns, home occupancy, or the usage patterns for individual appliances.

From the Lafayette Utilities System website (archived link) at: http://web.archive.org/web/20140112064851/http://lus.org/site322.php, the following statements are made:

“Smart meters do not monitor household activity.  They only record total energy usage for the home or business, just like all current LUS meters.”

The above utility statement completely ignores the fact that smart meters collect “incremental” energy usage data that can reveal household activity (as opposed to “total” energy usage).  From reading the LUS statement, the consumer is expected to believe that there is essentially no difference between an analog meter and a smart meter.  Thus, the LUS statement conveys no relevant information and constitutes deception.

“There is no way to determine, based upon the information collected and the technology used to collect the information, which appliances are being used or other intimate details going on inside a customer’s home, such as medical conditions or sexual activities, or activities of occupants occurring within the home.”

The above statement by the City of Naperville is false (based upon being contrary to the factual information provided in this blog article).

The Cat is Out of the Bag

Well, apparently at least some portions of the smart grid industry no longer see a reason to conceal the truth.  According to the SmartGridNews article:

“[T]he idea of using smart meters to simply tell us how much electricity is being used at any given time will seem … archaic.  One of the next areas of value comes from taking smart meter data and ‘disaggregating’ it to tell us exactly how customers are using electricity.”

[Note: Energy Disaggregation refers to a set of statistical approaches for extracting end-use and/or appliance level data from an aggregate, or whole building, energy signal without any plug level sensors.]

“In a recent pilot, Greater Sudbury Hydro worked with Ecotagious Inc. to test the impact of delivering actionable information and recommendations.  They disaggregated their smart meter data and combined it with behavioral science to deliver load specific feedback reports and recommendations to their highest potential customers. …  This could be just the beginning.”

“Utility companies wanting to meet their specific conservation targets to drive customer engagement should ensure they are making the most of their smart meter investment.  They can now use the power of smart meter data disaggregation to identify the customers who are most likely to help them reach their specific targets and turn them into willing partners in the drive for energy conservation.” 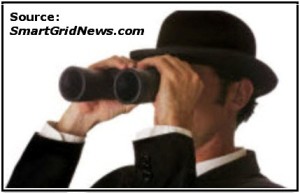 As stated by Warren Woodward in a letter to the Arizona Corporation Commission (ACC), the SmartGridNews article from May 15th uses a “creepy picture of a guy dressed in black and using binoculars.  SmartGridNews is shameless to promote Peeping Toms as cool.  Note also Orwellian phrasing such as ‘behavioral science’ and turning ratepayers into ‘willing partners.’   It’s not a ‘smart’ grid; it’s a sick grid.”

The SmartGridNews article is not the only “breaking news” for this past week.  A company named Bidgely announced that it “is offering its HomeBeat ‘energy disaggregation’ service free-of-charge to electric utilities for a limited time this summer.”

“Bidgely HomeBeat uses smart meter data, Zigbee HANs, appliance ‘fingerprints,’ and an algorithm that can compute energy use based on occupant behavior, the firm said.  The software-based system extracts energy signatures that are unique to each appliance in a home.  Just as human fingerprints are unique, so, too, is the digital signature produced by a household appliance, …  We track the energy consumed by each appliance without the need for plug-level hardware sensors.”

Now with the cat being out of the bag for everyone to see that smart meters are definitely privacy invading surveillance devices, smart grid advocates are beginning to shift their arguments to say:

“What appliance are you using in your home that you don’t want anyone to know about? … What are you hiding?”

To this, I will respond with the thoughtful words of a municipal mayor in British Columbia, Canada and what he had to say about smart meters:

“[Smart meters] will gather and disseminate personal information, which previously would have required a court order.”

“[It does not] matter how little you may care what government, corporations, and hackers know about what you do in your home.  What matters is that the safeguards protecting others who do care must remain in place.”  …  John Ranns, Mayor of the District of Metchosin, British Columbia, Canada.

All freedom loving people must oppose smart meters before there is no freedom, privacy, or security left to defend.  As stated in the SmartGridNews article:

“This could be just the beginning.”