Posted on December 9, 2017 by SkyVision Solutions 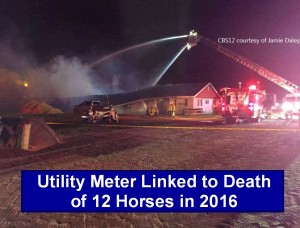 This is an investigative report on whether a smart meter likely killed 12 horses in March 2016.

On March 15, 2016, a horrific overnight barn fire killed 12 horses at the South Florida Trotting Center, with 11 horses rescued, some with severe injuries.  In addition, two firefighters were hurt putting out the flames.

According to the barn owner, Sam Stathis, “They made a determination that the electric meter blew up.” [1]

In a statement released Wednesday afternoon, investigators concluded that “an unspecified electrical malfunction caused a catastrophic failure at the meter.  This failure caused flames and sparks to ignite hay, feed, and other combustible materials that were stored nearby.” Fire Rescue said it considers the investigation closed.

Another news report [3] indicated that:

“Fire investigators said it was an electrical malfunction that blew the power meter, which in turn set a large pile of hay on fire.”

Video excerpts from some of the local news coverage is provided below:

The above video is presented in the public’s interest for non-commercial purposes.  This video may contain material used pursuant to the Fair Use Doctrine under 17 U.S.C. 107. [1] [3] [4]

Likelihood of Smart Meter Involvement Based upon Local News Reporting

Although specific reference to a “smart” meter was not made in news reports, the mention of an “electrical malfunction” with a “catastrophic failure at the meter” is a strong indicator that a smart meter was involved.

As described in an article at this website in November 2015, ‘catastrophic’ failures are expected with ‘smart’ meters [5].  That article provided industry expert information on how electronic power meters are subject to “new failure modes” as compared to traditional electromechanical meters.  Expected failure modes now include those that are termed “catastrophic,” and as stated in the article, “smart meters are expected to occasionally fail catastrophically while analog meters do not normally have that failure mode.”

Based upon an independent review smart meter fires in Saskatchewan, Canada, a catastrophic failure was defined as “a meter which has burnt, melted, blackened, caught fire, arced, sparked, or exploded.” [5]  As reported for the South Florida Trotting Center, the electric meter “blew up.”

The electrical service for the South Florida Trotting Center is provided by Florida Power & Light Company (FPL), a subsidiary of NextEra Energy, Inc.  FPL reported in 2013 that it completed the deployment of 4.5 million smart meters in its 35-county service area [6].  Based upon the fact that FPL announced it had completed deployment of smart meters in its territory three years prior to the fire, there is no reason to believe the involved meter was not a smart meter.

Details from the Fire Investigation Report versus Local News Reporting

Based upon the above information and local news reporting one would clearly conclude that a smart meter was likely involved in the tragic and deadly fire.  In April 2016 I was planning to publish an article to cover the story and through a local Florida resident, I obtained a copy of the incident report for the fire [7].  Quoting the synopsis section of the incident report:

“Based upon the physical evidence and the witness interviews, the multipurpose structure fire on March 15, 2016 at 7563 S SR 7, Lake Worth Florida was classified as accidental.  The analysis of the fire intensity and movement patterns indicated that the area of fire origin was inside the tack room on the south end of the building.  The cause of the fire was determined to be a unspecified electrical malfunction on the south end of the building in the area of several electrical components and/or devices (I was unable to identify which device caused the fire without further specific testing and examination).  This failure caused flames and sparks to ignite hay, feed, and other combustible materials that were stored nearby.  … The case is inactive pending further investigative information.” [Emphasis added]

Other details in the report included: 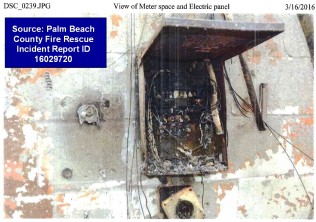 “The meter can had been mounted on the south wall approximately six feet from the ground with the circuit breaker panel to the east.  An impression pattern and screws for the meter can were observed on the wall.” [see photo.]

“The meter can and meter were consumed by the fire.” [emphasis added]

“[A witness] had heard an explosion prior to the fire.”

“[A witness] heard a loud pop.  He saw gold and yellow colored sparks flying from the left and right side of the barn.  He did not see any going above the barn.  The noise sounded like a transformer exploding.”

Surprisingly, the incident report did not identify a specific origin of the fire contrary to the news reports cited earlier in this article.  In the report, however, there was clear focus on the area where the utility meter was located, and the witness descriptions of hearing a “pop” and “explosion” would be consistent with a catastrophic meter failure.

Also surprising were the earlier news reports indicating that fire investigators considered the incident “closed” where the actual documentation called the investigation “inactive pending further investigative information.”  Based upon this information, I held off from writing my article back in 2016 concluding that Palm Beach County Fire Rescue had decided to have the meter remains tested to confirm the origin of the deadly fire.  This would make sense as 12 horses were killed in the fire and there was an estimated damage from the fire of $500,000.  This was a high profile fire with considerable public interest in the Palm Peach County area, and I later noted that Palm Beach County Fire Rescue included a photo from the fire on the cover page of its 2016 annual report [8].

2017 Follow-up on What Happened Regarding the Fire Investigation

I have written fewer articles at this website as of late, spending time on other endeavors, but it continued to bother me that I did not have a final resolution as to what happened in the 2016 fire at the South Florida Trotting Center.  So I recently made a records request of the Palm Beach County Fire Rescue asking for final documentation related to the March 2016 horse barn fire.  The records custodian was quite prompt in replying and sent me the incident report, the same report that I had reviewed over a year earlier. [7]

In further communications questioning that an object of origin for the fire had not been determined and that there was no indication of further testing, I was referred to the case investigator by the records custodian.  The case investigator initially replied promptly and stated:

“No specific testing was conducted by me or my office.  Once the fire was deemed not to be a case of arson, I turned the scene over to private sector personal [sic/personnel].”

I then replied to the case investigator requesting clarification as to why local news reports indicated at the time that their office had determined the utility electric meter was directly involved in the fire but no such reference was made in the incident report that I had been forwarded in response to my records request.

At that point, I did not receive a response from the case investigator (as of a week ago).

So what am I to think now?  Did the utility company, FPL, apply pressure not to point to the utility meter as the origin of the fire in the Palm Beach County Fire Rescue incident report?  I don’t know, but I think it is fair to say that “Questions Remain Regarding Investigation by Authorities for 2016 Deadly Fire Linked to Utility Meter,” repeating the title I assigned for this article.

The case investigator indicated that the scene was turned over to “private sector” personnel once the fire had been ruled accidental.  For such a deadly fire, doesn’t the public deserve to know more regarding what happened?  Are there no lessons learned?  Why did the case initially seem so clear to be a catastrophic meter failure but later could not be determined?

Once the “private sector personnel” get involved, you basically get into a situation where the property owner, insurance company, and utility company enter into a legal/ financial settlement of sorts where likely no entity admits liability and therefore the public interest is not served.  This is what makes it so difficult and frustrating to provide better focus on the catastrophic smart meter failures (and resultant fires) as they occur.

When fires are reported by news organizations as an “electrical malfunction,” the public thinks about how terrible the “accidental” fire damage and deaths are but then isn’t informed on the true cause of the fire as related to risky smart meters that should never have been deployed among the populace without their consent.

In 2014, I wrote a comprehensive article describing how smart meters increase the risk of fires [9].  Since then, evidence has only continued to mount regarding safety issues pertaining to smart meters.

Sam Stathis, the owner of the South Florida Trotting Center made mention to the press that he plans to use the deadly fire as a learning experience and is “looking into sprinkler systems and other fire prevention measures” [10].  One of the best fire prevention measures would likely be not to have a “smart” meter on one’s own property.

I respect the work that our firefighters and investigators do under difficult circumstances, but when utility meters are involved in fires (not the property of the homeowner or business), we need their help in determining if there is a safety issue involved so that the problem is literally not swept under the rug.

If anyone has further information related to the cause of the tragic fire involving the South Florida Trotting Center back in March of 2016, please let me know.

In response to additional inquiries I had been making about this fire, one of the private party forensics investigators supposedly involved with the follow-up to the fire stated in a December 13th e-mail to me that “The joint exam has not been done [yet]. There are many parties involved. This is a on going fire exam.”

So this is disappointing that over a year and half after the fire, the case remains open.  My primary issue raised in this blog article, however, was that local governmental authorities were too quick in turning the investigation over to private parties where the public interest would be better served to know whether there were lessons learned regarding utility meter issues that may never now be publicly revealed.

[7] Palm Beach County Fire Rescue Incident Report ID Number 16029720.  Due to the report containing names, addresses, and other personal information of witnesses, I have elected not to link to this document.