When Water Gets Inside Smart Meters, “All Bets Are Off.” 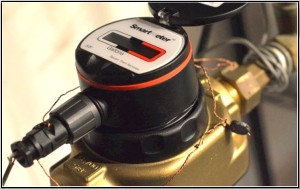 In June it was reported based upon a Chicago Tribune investigation that a Chicago Suburb Claims Smart Water Meters Don’t Overcharge. “They Misrecord.”  The Tribune has continued to investigate this issue and has found problems with smart water meters in another Chicago suburb, this time in Aurora.

So far only nine meters have been discovered to malfunction: three spinning forward, three spinning backward and two whose patterns couldn’t be determined.  Another meter inexplicably bounced back-and-forth between display numbers.  Aurora officials were concerned enough about the strange behavior that they asked the manufacturer, Sensus, to determine the problem.  According to Sensus, water had gotten into the meters’ electronics in ways the manufacturer hadn’t before realized.

Tom Kelly, head of the industry’s committee on meter standards, told the Tribune that water is a key danger to electronic meters:  “Once you get water inside the electronics of these meters, all bets are off.  It can do just about anything.”

The fact that about anything can happen when water gets inside a smart meter was best exemplified in Saskatchewan when it was reported last October that moisture and contaminants getting inside Sensus smart electric meters were a major factor in catastrophic meter failures and ensuing fires.

As previously reported for the smart electric meters in Saskatchewan, Jack Ritenburg, an electrical engineer and head of Ritenburg & Associates concluded that moisture and contaminants inside the meters was the cause of the smart meter fires.  He also concluded that “water intrusion due to holes in meter boxes, ‘hot socket’ conditions in the meter box and over voltage in the distribution system” or other “external factors” were not the cause of the fires as previously claimed by the manufacturer.  As a review, here is the SkyVision Solutions video from last October:

In conclusion, among the many problems with so-called “smart meter technology” is that water and smart meters don’t mix, whether it be due to causing inaccurate or inflated bills, or worse, causing fires in the case of smart electric meters.

“Another suburb reports problems with digital water meters,” at http://www.chicagotribune.com/news/ct-aurora-water-meters-met-20150724-story.html

“Smart Meter Failures a ‘Catastrophe’ in Saskatchewan,” at https://smartgridawareness.org/2014/10/28/catastrophic-smart-meter-failures-in-saskatchewan/

1 Response to When Water Gets Inside Smart Meters, “All Bets Are Off.”