In the original story from 2015, I indicated that Oncor was in the process of appealing the ALJ decision.  Based upon a Decision and Order dated July 29, 2016, Oncor lost its appeal to a 3-member panel of the NLRB.

“We … find that Reed’s senate testimony concerning smart meters and meter bases heating up and burning more frequently related to (and was spurred by) an ongoing and legitimate concern of the Union about the safety of represented bargaining unit employees working with the meters, particularly given the hazard of electrical arcs.  It is not disputed that safety of the new devices to workers was one of the reasons the Union’s attorney informed Reed of the upcoming senate hearing. …

… it is not disputed that during deployment of smart meters, troublemen reported an increase in reported incidents of burned up meter bases because of installation issues, including those resulting from the narrower blades of the smart meters not fitting as well into the meter bases. …

The Board has considered the decision and the record in light of the exceptions and briefs and has decided to affirm the judge’s rulings, findings, and conclusions …”

“Law360, Dallas (August 1, 2016, 8:06 PM ET) — Texas utility Oncor must rehire and pay back-salary to a former employee and union member who had testified before state lawmakers about potential safety hazards of advanced utility meters, because that testimony was protected union activity, the National Labor Relations Board held Friday.” 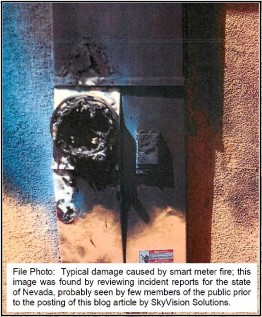 In November 2014, an Administrative Law Judge (ALJ) for the National Labor Relations Board (NLRB) issued a decision for a case involving Oncor Electric Delivery Company, L.L.C. of Dallas, Texas.

This case involves an Oncor employee who was discharged (including layoff and refusal to hire) for allegedly making untruthful remarks about smart meters causing fires or damage to customers’ homes.

The ALJ decision concluded that Oncor had engaged in unfair labor practices.  Oncor was ordered to reinstate the discharged employee and “make him whole for any loss of earnings and other benefits that he suffered as a result of his unlawful discharge.”  Oncor is currently in the process of appealing the ALJ decision.

Separate from the details for the employee discharge complaint brought before the NLRB, there are certain uncontested facts on the subject of smart meter fires that are revealed as a result of reviewing the NLRB case files.  The purpose of this article is to highlight revelations in two separate areas:

The smart grid industry continues to promote a propaganda narrative that smart meters do not cause fires nor do they even increase the risk of fires.  For example, the Smart Grid Consumer Collaborative (SGCC) publishes a “fact sheet” where it lists a so-called “myth” regarding smart meters that:  “Smart meters are hazardous, increasing the risk of fire and explosion.”  The SGCC purportedly debunks this myth by providing certain “truths” as indicated below.

In another example of misinformation, a San Antonio, Texas media outlet reported the following in August 2014:

“Landis+Gyr is unaware of any case where our meter was the source of a fire,” stated Landis+Gyr spokesperson Stan March in an email.

This website has provided substantial evidence to falsify the above claims, misrepresentations, and misinformation, including the following articles:

This article and the discussion of the NLRB case files provide additional information to disprove the industry claims of complete safety with regard to smart meters.

The NLRB decision makes reference to CenterPoint Energy since the employee discharged by Oncor had previously contacted another utility, CenterPoint, which uses Itron meters (versus Landis for Oncor) to determine what types of problems they were having with smart meters catching fire.  As written in the ALJ’s decision:

“Consistent with the above, the reports that Local 66 representatives … received from members indicated that the major cause of burned up Itron smart meters in Houston appeared to be due to loose connections, owing in part to their thinner blades vis-à-vis the analog meters that they replaced.”

“In line with their testimony, Longeway [*], [Oncor’s] expert witness, was aware that Itron had produced models in which the blades were too thin and did not seat with sufficient pressure in the jaws of the meter base.”

[*]  K. Derek Longeway, P.E. was contracted by Oncor as an expert witness, and “the parties stipulated to his expertise in the area of fires in general. … Moreover, although the Respondent has had a contractual relationship with Longeway, and paid him to be a witness, nothing in his testimony suggested deception or exaggeration.”

A separate case file mentions “two pallets of burned up meters” in CenterPoint’s meter shop, and that CenterPoint “meter technicians had reported problems with meters’ communication with the remote site control and many issues with meters melting or burning up.”

Based upon the ALJ decision, it can be concluded that certain Itron digital/smart meter models were constructed with blades too narrow to properly fit into a standard meter socket or base.  This creates a hot socket condition which further results in fires or explosions in some instances.  Although the utility may blame the customer for the fire, the actual cause of the fire is due to improperly sized components of the smart meter itself.

The primary information pointing towards Landis+Gyr (L+G) smart meters causing fires is based upon the evidence summarized by the ALJ dealing with lawsuits:

“After the October 10 management meeting, [it was asked whether there were] any claims or lawsuits where smart meters had caused a fire. … a check of the claims data base … found about five lawsuits regarding smart meters, two or three of which claimed that smart meters caused a fire.  None of them went to trial: one was dismissed on a motion for summary judgment, and the other two settled. In one, L+G indemnified Oncor, so presumably, the problem arose from the smart meter itself.”

In another case file, more specific information is documented:

“Respondent and Landis + Gyr, the manufacturer of the smart meters used by Respondent, entered into a settlement agreement with the State Farm Lloyds Insurance Company on November 8, 2013, concerning the aforementioned July 7, 2011, fire at the Chaney residence (GC Exh. 6, 8). The ALJ correctly found that, “presumably, the problem arose with the smart meter itself’ because Landis + Gyr indemnified Respondent. (JD slip op. at 17, LL. 7-9).”

It should be emphasized that the statement, “L+G indemnified Oncor, so presumably, the problem arose from the smart meter itself,” is made by the Administrative Law Judge based upon a review of the evidence presented for the case.

As utilities never admit that smart meters cause fires, the above statement by the ALJ is about as close as you are going to get to a conclusion of fact.  This, of course, contradicts the statement by a Landis spokesperson mentioned earlier that, “Landis+Gyr is unaware of any case where our meter was the source of a fire.”

Based upon the above information and other evidence presented during the NLRB hearings, the ALJ deduced the following:

“I cannot conclude that [Oncor] has established that it reasonably determined that [the employee] deliberately lied about smart meters causing fires or damage to customers’ homes and that his situation was therefore analogous to employees who were discharged for bald-faced falsehoods.”

As has been previously established, Analog Meters Withstand “Hot Sockets” Better Than Smart Meters, and analog meters are also generally immune to line voltage surge events which can lead to catastrophic meter failures for digital meters.  We thus now have even more evidence that Smart Meters Increase the Risk of Fires! and that the public is more at risk with smart meters as compared with traditional analog meters.  This directly and convincingly contradicts the industry narrative that smart meters are completely safe.